The Pinchpenny Phantom of the Opera 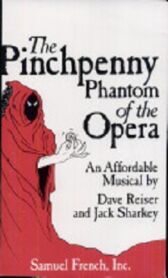 Gaston, proprietor and star tenor of a tacky opera house, can only afford a chorus of two (Pristine and Bubby) and one guest soprano per opera

Because unscrupulous Airwick (Phantom of the Opera) wants Pristine to star

And at the rate he bumps off her rivals, she'll soon be the only soprano in grand opera!

Sub-titled An Affordable Musical, this hilarious melange of crazed desire, gruesome death and bone headed ambition is a romp for audiences and players alike

Can be performed by only four players on a single set