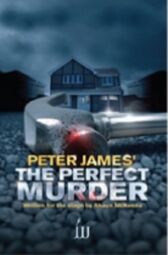 Peter James is one of the foremost proponents of crime drama, his novels selling more than 15 million copies worldwide

And The Perfect Murder is the first of his works to be adapted for the stage...

Victor Smiley and his wife Joan have been married for twenty years, but their marriage has reached crisis point

Plans that are just as dark as his

Throw into this mix psychic sex worker Kamila, handsome jack of all trades Don and alibis as holey as Swiss cheese

And while the novels are somber in tone, this stage translation plays the majority of the action for laughs

That said, there are genuine frights and clever plot twists throughout

And a few blood-curdling screams from both stage and audience