The Passion of Jerome 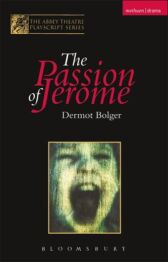 This is a story of a violent haunting ...

That is until now

Dermot Bolger's powerful, graphic and often shocking play explores the possibility of a divinity benign or malevolent existing in a secular world

At once lyrical and frightening, amoral and spiritual, it is a gripping and utterly original piece of theatre

"A writer of frenetic energy and imagination" ~ Sunday Times