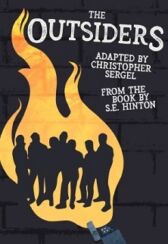 Ponyboy, a Greaser on the wrong side of life, is caught up in territorial battles between the have-it-made rich kids - the Socs - and his tough, underprivileged "greaser" family and friends

In the midst of urban warfare, somehow Ponyboy can't forget a short poem that speaks of their fragile young lives:

Her hardest hue to hold.

Her early leaf's a flower;

But only so an hour.

Then leaf subsides to leaf.

So Eden sank to grief,

so dawn goes down to day.

Nothing gold can stay.

"Robert Frost wrote it," Ponyboy tells Johnny. "I always remembered it because I never quite got what he meant by it."

Cherry, a beautiful Soc, comes to share a special sensitivity with Ponyboy as she discovers that he remembers poems and needs to watch sunsets

At the same time, Cherry's attracted to the older, tougher Dallas, and in a sense she's caught in the violent space between the Greasers and the Socs

While the Socs appear to have everything, the only thing a Greaser has is his friends

As these young people try to find themselves and each other, as the sadness of sophistication begins to reach them and their battles and relationships reach a resolution, Ponyboy's dying friend, Johnny, sends him a last message...

"I've been thinking about the poem that guy wrote. He meant you're gold when you're a kid, like green. When you're a kid everything's new, dawn. It's just when you get used to everything that it's day. Like the way you dig sunsets, Pony. That's gold. Keep it that way. It's a good way to be."