The Old Woman Who Lived in a Shoe 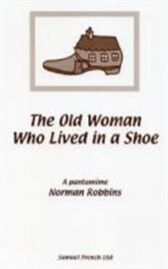 Dame Dallymore`s orphanage is in peril - she's been unable to pay the rent for ten years, so now the cruel squire wants to make her and all the orphans homeless

Just when the situation seems dire, it gets worse, for a giant treads on the orphanage and smashes it to smithereens, leaving his shoe behind!

Mother Goose makes the shoe into a home for the orphans and all looks fine - but then the Giant comes back for his lost footwear and accidentally carries off Princess Marigold, girlfriend to the Dame`s son Croydon