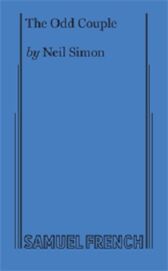 And if the mess is any indication, it's no wonder that his wife left him

Late to arrive is Felix, who has just been separated from his wife

But as the action unfolds, Oscar becomes the one with murder on his mind when the clean freak and the slob decide to room together

"There is scarcely a moment that is not hilarious" ~ NY Times