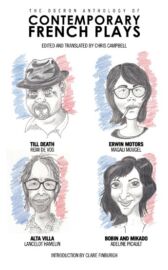 A diverse selection of contemporary plays from a range of established and up-and-coming playwrights based in France, edited and translated by Chris Campbell, literary manager of the Royal Court

The wholesale rejection of naturalism begun at the turn of the twentieth century by Alfred Jarry and Roger Vitrac, and taken to its extreme by post-war authors including Beckett and Nathalie Sarraute, led to the explosion of classical theatrical notions like narrative coherence, linear action, psychological characterization and comprehensible dialogue, which were replaced by dissolute poetic fragments

Theatre became a laboratory for research into formal possibility

Contemporary plays in French often push the boundaries of conventional theatrical presentation and production, posing new challenges for directors and actors, who are obliged to revise and renew their dramatic practice in order to stage them

So, too, do these plays pose challenges for translators, and Chris Campbell has succeeded with modest mastery in rendering the music of each of the four authors' individual voices in his translations" ~ Dr Clare Finburgh, University of Kent, from her Foreword