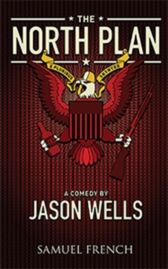 After a ruthless faction seizes power in Washington, Carlton Berg - a bureaucrat for the State Department - runs off with the new regime's top secret enemies list

Unfortunately for Carlton, the chase has come to an end in a police station in the Ozarks town of Lodus

With a pair of DHS agents on the way, Carlton's last hope is in the people around him ...

... an unsympathetic police chief, an ambivalent administrative assistant, and fellow prisoner Tanya Shepke, a motor-mouthed recidivist who's turned herself in for drunk driving and thinks Skynyrd should be on the new money

"As disturbing as Jason Wells' play is, it's just as hilarious ... The show crackles with wit and energy ... one of those rare plays that manages to combine a powerful message ... with a raucous sense of humor and deft stagecraft that plays with conventional notions of farce and manages to make them as funny as the first time you'd ever seen such things ... If I were an artistic director shopping for a play, I'd go all-in to pick this one up" ~ New City

"Jump-to-your-feet fantastic! ... The plot is solid. The characters are genuine. The dialogue is smart. The intrigue and absurdity is pure 'Pulp Fiction' ... At the show I saw, the audience literally jumped to their feet with thunderous applause and cheering ... Funny, scary and totally believable - which makes it funnier and scarier!" ~ Chicago Theater Beat