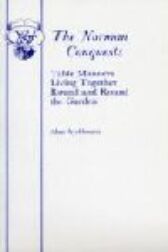 The Norman Conquests is a trilogy of inter-connected plays - Living Together, Round and Round the Garden and Table Manners

They all occur during a single weekend in different parts of the same English country house and follow the same six characters - assistant librarian Norman, his wife, his in-laws and the local vet

Norman attempts to seduce his sister-in-law Annie, charm his brother-in-law's wife Sarah and woo his estranged wife Ruth, during an hilarious weekend of eating, drinking and misunderstanding

Each play in the trilogy is complete in itself and can be played alone, or as a group they can be performed in any order

However, each benefits when produced with the others

"To write one brilliant comedy is a feat. To write three in a row is a tour de force so exceptional I can only throw my hat in the air and rejoice" ~ London Daily Telegraph