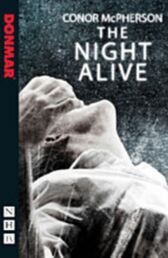 From the author of The Weir and The Veil, this is a warm and stylish play that deftly mines the humanity to be found in the most unlikely of situations ...

Set in the bedsit of a Dublin house, The Night Alive tells the story of a random encounter between Tommy, a working-class Dubliner and Aimee, a prostitute he rescues from an abusive relationship

Tommy's not a bad man

He's getting by, renting a bedsit in his uncle Maurice's run-down Dublin house

Just about keeping his ex-wife and kids at arm's length

Then one day he comes to the aid of Aimee

Their past won't let go easily

"Another triumph" ~ Independent on Sunday

" ... boisterous comedy as well as its aching poignancy ... a spellbinding and absolutely gorgeous new play by one of the true poets of the theatre" ~ Time Out, New York

" ... the finest dramatist of his generation" ~ The Telegraph