The Need for Words - Voice and the Text 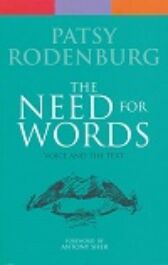 "In The Need for Words, Patsy Rodenburg shows herself to be an inspired and inspiring teacher

Her work is an essential tool for today's teachers and students

She enables them to regain power over language, voice and speech so they can speak out and be heard" ~ Jenny Harris - Head of Education, Royal National Theatre

" ... an astonishing book. It takes you on an extraordinary voyage of discovery through the worlds of language and texts. Every actor and non-actor should know it and read it" ~ Declan Donnellan