The Mother & The Father - Two Plays 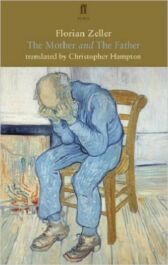 "The most acclaimed new play of the decade"

Now eighty years old, Andre was once a tap dancer

He lives with his daughter Anne and her husband Antoine

Or was he an engineer whose daughter Anne lives in London with her new lover, Pierre?

The thing is, he is still wearing his pyjamas and he can't find his watch

And he's starting to wonder if he's losing control

★★★★★ 'A wonderfully peculiar, quietly stunning depiction of dementia... a revelation, as sharp and surprising a play as you'll see all year' ~ The Times

★★★★★ "A play that constantly confounds expectations and works almost like a thriller, with a sinister Pinteresque edge" ~ Guardian

Anne loved that time in her life when she prepared breakfast each morning for her two young children, Sara and Nicholas

Spending hours alone, Anne's world begins to twist around her

Has her favoured son Nicholas really returned to her?

And what of the suspicious actions of her husband?

SEE ALSO THE FINAL PART OF THE TRILOGY
The Son