The Midnight Ride of Paul Revere 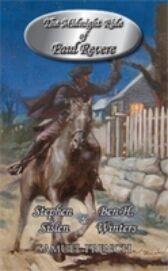 Paul Revere etches out a humble living as a silversmith in Boston, where Americans and British alike hail the exquisite artistry of his work

But when Paul's revolutionary friends, John Hancock and Samuel Adams pressure Revere to take a stand against British tyranny and join the Sons of Liberty, he worries that supporting the cause of revolution would mean losing his business and risking the safety of his family

From the halls of British Parliament, to the port of Boston and the "Tea Party" protest, to the Boston Massacre and the dangerous thrill of Revere's now-legendary ride, this new musical makes American history accessible and exciting through a unique combination of music, drama and humor

The Midnight Ride of Paul Revere tells the inspirational, universal story of how ordinary people can make a difference

Please note that while the show can be performed with as few as five actors, it can happily accommodate larger casts - the doubled parts can easily be undoubled, and a large ensemble would work well in the big group numbers

Music On Hire only