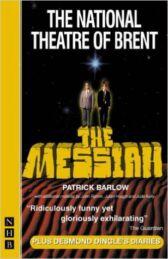 A zany satire from the crazy National Theatre of Brent that sends ups theatre's epic pretensions and earnest solemnity ...

The distinguished historian and thespian, Desmond Olivier Dingle and his valiant assistant Raymond Box, bring us their version of the Greatest Story Ever Told

Thrill to the mystery of the virgin birth, delicately portrayed by Raymond

Gasp at the miracles

And let Desmond show you how they were done

And be intensely moved by the Sermon on the Hill

"The comedy of the National Theatre of Brent is two-pronged. It is about pretension and about incompetence. Both prongs are bliss" ~ Financial Times

"The basic joke is at the expense of theatre itself

As Desmond Olivier Dingle and his sidekick Raymond Box attempt to transport us back to the Holy Land, we are reminded both of theatre's hierarchical structure and its frequent vanity

Desmond is bossy, smug, self-important and deeply sceptical about poor Raymond's weekly acting class with Mrs Cotes in Staines. But, as we watch two actors attempting to encompass the Roman census or the jostling Nazarene populace, I thought of those self-deluding occasions when theatre optimistically imagines it can easily evoke epic experience ... but the climactic moment when a twinkling model Bethlehem is trucked on to suitably jubilant chords goes beyond satire

The trick of the National Theatre of Brent - having demolished all our expectations - is to show that theatre can, after all, evoke the momentous" ~ The Guardian