The Magic Tree - A Story for Christmas - ASSEMBLY PACK 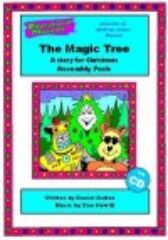 A story about how the tradition of the Christmas Tree began?

This fun Christmas musical takes two children on a madcap journey back 700 years, to a German forest. They are joined by their magic Christmas tree and two presents, a grumpy robot and a cool dude bear. They meet St Boniface and his followers and learn how the tradition of a Christmas Tree began