The Magic Tower and Other One Act Plays 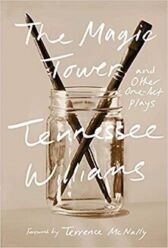 "The peak of my virtuosity was in the one- act plays. Some of which are like firecrackers in a rope" ~ Tennessee Williams

Plays populated by a hopelessly hopeful chorus girl, a munitions manufacturer ensnared in a love triangle, an overconfident mob dandy, a poor couple who quarrel to vanquish despair, a young "spinster" enthralled by the impulse of rebellion, and, in "The Magic Tower," a passionate artist and his wife whose youth and optimism are not enough to protect their "dream marriage"

This volume gathers some of Williams's most exuberant early work

It includes one-acts that he would later expand to powerful full-length dramas: "The Pretty Trap," a cheerful take on The Glass Menagerie, and "Interior: Panic," a stunning precursor to A Streetcar Named Desire

The plays include:
* At Liberty
* The Magic Tower
* Me, Vashya
* Curtains for the Gentleman
* In Our Profession
* Every Twenty Minutes
* Honor the Living
* The Case of the Crushed Petunias
* Moony's Kid Don't Cry
* The Dark Room
* The Pretty Trap
* Interior: Panic
* Kingdom of Earth
* I Never Get Dressed Till After Dark on Sundays
* Some Problems for The Moose Lodge