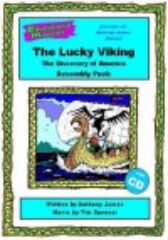 Leif the Lucky, one of the unluckiest Vikings in his home village on Greenland, decides to prove himself a successful explorer by finding the mythical new land spotted by the merchant, Bjarni, 15 years before. Leif and his crew build a longship and set out to conquer a new land

However, the mischievous God Loki has decided to thwart the attempt by sending a huge storm to swamp Leif and his crew

With the help of the Norse Gods, Odin and Thor, Leif finally makes it to the new land which he calls Vinland. However, Loki succeeds in persuading the local people to fight off this new Viking invasion

Will Leif's journey to North America be a success despite the plans of the mischievous God Loki, and will any of his crew survive to tell the tale?