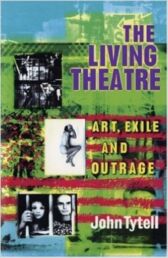 Their flamboyant and counter-cultural experiments attracted international attention, their performances were leftist and sexually explicit

They suffered repeated censorship, arrests and imprisonments. In every way they were wildly notorious and theatrical

Tytell's history of the company is a detailed biography of its two charismatic founders and lead performers, Julian Beck and Judith Malina, and a searching look at the American avant-garde at mid-century

"A warm and passionate history of one of the great radical theatres of our time and a wonderful chronicle of the American cultural and social scene of the last fifty years. I recommend it to anyone who loves theatre" - André Gregory

"From the earliest years of its formation to the powerful and lasting impact on the American culture, John Tytell accurately recalls the people and the events that gave life and liberty to The Living Theatre. I'm indebted to Tytell for this honest and moving portrait of Julian Beck and Judith Malina" ~ Martin Sheen

"The narrative of the founding and embattled maintenance of The Living Theatre is a ripping American epic ... an important book that will serve as a reference for years to come" ~ American Theatre Magazine