The Life of Stuff - Sex Drugs and Frank Sinatra 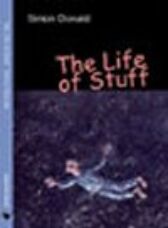 "Simon Donald's play has small time crook and hardman Willie Dobie trying to move up with the big boys. To do this he dabbles in the illegal pharmaceutical market. As a career move and business idea this is certainly less stressful than teaching

It can, though, be occasionally more dangerous

The world that these characters inhabit moves at a furious and frightening pace and certainly kept this reader on his toes. The banter fair bounces around like a ping pong ball and the crack is both wise and funny. The snappy dialogue is reminiscent of Brenton and Hare in the early seventies glory days" ~ Roy McGregor, Teacher of Drama