The Lieutenant of Inishmore - STUDENT EDITION 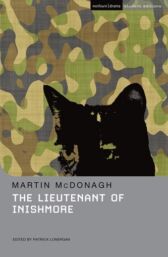 "Wee Thomas was a friendly cat. He would always say hello to you were you to see him sitting on a wall. (Pause.) He won't be saying hello no more, God bless him. Not with that lump of a brain gone"

Who knocked Wee Thomas over on the lonely road on the island of Inishmore, and was it an accident?

A farcical look at political violence as it's played out during The Troubles in Northern Ireland against the drab backdrop of a bare, rustic Irish cottage and unending boredom in an inhospitable environment in which a mutilated cat sets off a murderous cycle of revenge

A wildly funny and gruesome portrayal of an Irish terrorist who is numb to the feelings of his victims, but yet completely attached to and sentimental about his pet cat.

'A brave satire... Swiftianly savage and parodic... with explicit brutal actino and lines which sing with grace and wit' Observer

"Martin McDonagh is both a powerful writer of staying power and an individual talent within a powerful tradition ... His is a voice you will want to hear again" ~ Sunday Times