The Last of Sherlock Holmes 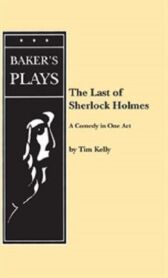 This little farce-comedy pits Holmes and Watson against their greatest foe, the evil and sinister Professor Moriarty

The play begins with the villain's dramatic capture

Soon after, Mrs Hudson announces the arrival of heavily-veiled women who have come on matters of the greatest delicacy

Now it's up to Holmes to prove, via fingerprints, the criminal's true identity