The Lady from Maxim's 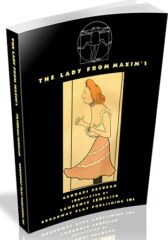 In spite of the appearance of the doctor's prim, proper and devoutly religious wife

Which launches into motion the kinds of farcical twists and turns of deceit and the threats of imminent discovery that no author has ever accomplished with more expertise, panache, and hilarity than Feydeau

"It seems to me that for fertility in droll inventions, the perpetual outpouring of unforeseen misunderstandings, for the inexhaustible gaiety of dialogue, Feydeau's new play is superior to everything he's written so far

The most astonishing thing is the sureness with which everything is controlled, explained, justified, in the most extravagant buffoonery

The cross-purposes rebound nonstop, and every time one is introduced, one thinks, 'Yes, that's true, it couldn't happen any other way'

There is no idle detail, not one that hasn't its function in the action, not a word which will not have, at a given moment, its repercussion in the comedy, and this word - I don't know how it's done, it's the gift of the dramatist - sinks into the memory, and reappears just at the moment when it has to cast a vivid light on an incident, which we did not expect, but which seems entirely natural, which charms us both by its unpredictability and by our impression that we did predict It

The first act lasts no less than an hour, and there isn't a moment's boredom; the absurdities burst one after another with a marvelous abundance and intensity

I have seen nothing like it." -Francisque Sarcey, Le Temps (contemporary Review)