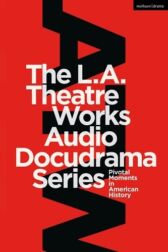 With ensemble casts and innovative staging potential these plays are perfect for theatre companies, schools and educational groups looking to stage familiar historical stories in new and original ways

RFK: The Journey to Justice ~ Murray Horwitz and Jonathan Estrin

As well as these five scripts the Anthology also includes a foreword by Professor Michael Hackett, Professor of Directing and Theatre History at UCLA School of Theater, Film and Television

A dramaturgical note by Elizabeth Bennett