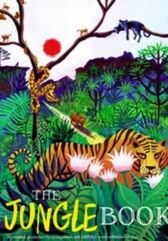 Large Mixed Cast
Rudyard Kipling's classic tales of the Indian jungle, animals, humans, friendship, love and the natural laws that bind us all together are brilliantly brought to the stage

Lost and alone in the jungle, how will the infant Mowgli survive in this terrifying but wonderful new world?

And how will he escape the claws of the vengeful tiger, Shere Khan? ​

Only the help and guidance of Baloo the bear, Bagheera the panther and Akela the wolf can protect him from the mischievous monkeys, the powerful python Kaa

And ultimately from himself

A spell-binding, edge-of-your-seat adventure of song, dance, music and laughter that evokes the brilliance of Kipling's original stories

Reign of the Tiger

★★★★★ "A dazzling experience that borders on world-class" ~ The Herald

★★★★★ "Just don't go expecting Disney. It's better than that! And it's live and roaring its theatrical head off! Rooooooaaaar!" ~ East Midlands Theatre

'"Audiences thoroughly enjoyed your wonderful show. We were so proud that it was the NZ debut!" ~ Maura Flower, Otamatea Repertory Theatre, Kaipara District, Northland, New Zealand.

"Great show with magical music of BB Cooper, we had such a journey when we did the show here in Finland" ~ Theatre Muste! Ari Ainasoja, Theatre Muste, Turku, Finland.

'BB Cooper has written a fantastic musical based on the real Jungle Book versus the Disney-fied version. The songs have variety of style and heart while at the same time as being accessible to all ages of performers. It was a great script and musical to direct and see performed" ~John Lunman, Whitby Courthouse Theatre, Ontario, Canada.

"The Jungle Book" is a way to appeal to a larger group of people. We wanted to do something that was a family-oriented story that would be good for different age ranges" ~ Michael D'Addario, Theatre Director, Stafford Players, Fredericksburg, VA, USA

THIS IS THE LARGE CAST VERSION