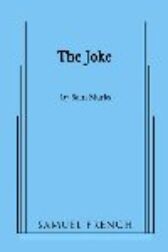 It's 1965 and two comedians, "Steady Eddie" & "Doug the Mug," knock 'em dead every night in the Catskills

Punchlines and cheap shots fly - on stage and off - as Doug and Ed battle for the spotlight over a decade, pushing each other to the cusp of a new direction of stand up comedy

With their personal and professional lives uncovered at center stage, Eddie and Doug must find a way to laugh it off while staying at the top of their game

"A tasty two-hander by Sam MarksA comedy team working the Catskills in the 1960s and '70s, getting few laughs while undergoing all the stresses of a doomed marriageAnd just as in a marriage in which one half of the couple changes while the other stays the same, the relationship deteriorates. Allusions to a woman and to the historical context as the '60s give way to the '70s are tantalizing but not overdone; the focus stays on the two men." ~ Neil Genzlinger, The New York Times

"The Joke is both funny and intense. Funny in that it knows and respects the craft of its protagonists, a pair of Borscht Belt comedians; intense in a way that only stand-up comics can be when no one is watching them (and sometimes even when someone is savage, acerbic, biting, and downright feral" ~ Michael Criscuolo

"The comedians' impressively dysfunctional relationship intrigues throughout, especially as the performance draws to its frank, merciless close. Despite their sniping, the men need each other as much as Doug needs his alcohol. If we sometimes question why, it's in the same spirit that we question our own inadequate, inescapable relationships" ~ Abigail Deutsch, Village Voice