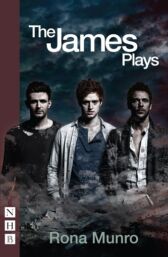 James I: The Key Will Keep the Lock explores the complex character of the colourful Stewart King poet, lover and law-maker

Captured at the age of 13 and crowned King of Scots in an English prison, James I of Scotland is delivered home 18 years later with a ransom on his head and a new English bride

The nation he returns to is poor, the royal coffers empty and his nobles are ready to tear him apart at the first sign of weakness

Determined to bring the rule of law to a land riven by warring factions, James faces terrible choices if he is to save himself, his Queen and the crown

James II: Day of the Innocents depicts a violent royal playground from the perspective of the child King and his contemporaries, in a terrifying arena of sharp teeth and long knives

Crowned when only six, abandoned by his mother and separated from his sisters, the child King is little more than a puppet

There is only one friend he can trust - William, the future Earl of Douglas

As James approaches adulthood in an ever more threatening world, he must fight to keep his tenuous grip on the crown while the nightmares of his childhood rise up once more

James III: The True Mirror like the King himself, is colourful and unpredictable, turning its attention to the women at the heart of the royal court

Charismatic, cultured, and obsessed with grandiose schemes that his nation can ill afford, James III is by turns loved and loathed

Scotland thunders dangerously close to civil war, but its future may be decided by James' resourceful and resilient wife, Queen Margaret of Denmark

Viewed together the trilogy creates an intricate and compelling narrative on Scottish culture and nationhood, full of playful wit and boisterous theatricality

The James Plays premiered at the Festival Theatre, Edinburgh, in August 2014 as part of the Edinburgh International Festival, before transferring to the UK's National Theatre

"Astonishing. A feast of theatrical might and blistering emotion" ~ Daily Telegraph