The Impossibility of Now 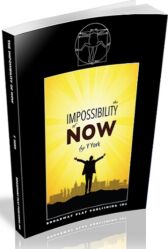 What do you do when your spouse is conked on the head and wakes up with a terrifyingly happy and optimistic new personality?

Carl's wife, Miranda - a poet - finds that he now has a strangely different relationship with words than he used to

Now he simply delights in the miracle of words - their sounds, their meanings, the way they look - which he envisions as a flurry of snowflakes drifting through the air

As Carl wanders around his Las Vegas home, trying to remember his past life, Miranda has to deal with the shambles of their marriage from before Carl's accident

She's having a complicated affair with a dentist named Anthony, but now super-positive Carl doesn't at all resemble the Carl who made her so miserable

Where before he was withholding and unhappy, now Carl is joyful and content

He's eager to see his wife, and desperate to please her

But is it too late to turn the marriage around?

The Impossibility of Now is funny and touching and endearingly sweet " ~ Paul Constant, Seattle Review of Books

"Utilizing a highly original plot, outstandingly witty dialogue this romantic comedy delivers the goods. And how! An unexpected delight delicious and magical ~ Marie Bonfils, Drama In The Hood