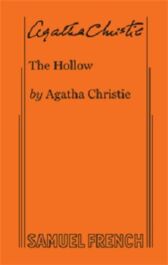 Dr Cristow is at the center of the trouble - Henrietta, his mistress and Veronica, his ex-mistress and Gerda, his wife are all at The Hollow

And Veronica states that if she cannot have him, no one shall

Enter Inspector Colquhoun and Sergeant Penny to solve the crime ...

"Agatha Christie has staged, against her smartest, most hyperemotional background so far, the shooting of a philandering doctor" ~ Maurice Richardson, The Observer

"The Hollow is a ''who's going to get it'' that quickly turns into a ''whodunnit.' A genuine crowd pleaser and a worthwhile evening of entertainment" ~ Leah D. Frank, The New York Times

"To the end her listeners stay rapt... The main interest of the play, as a piece of writing, is in the mystery; but Mrs. Christie writes quick, speakable dialogue and, gleefully, her cast keeps us guessing until the dying minutes of the third act" ~ JC Trewin, The Times