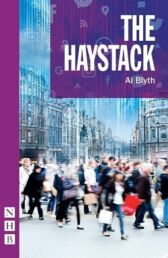 ‘Yes, we’re geeks, yes, we sit at computers all day, yes, we barely leave Cheltenham, but we are still, when it comes down to it, spies’

They're also the UK's 'National Defence Information Security Team' – recruited by GCHQ for their sky-high IQs and ability to work quickly and discreetly, no questions asked

With unfettered access to the world's data and infinite powers of electronic intrusion, these unlikely agents are essential cogs in the national security machine

But when their window onto intelligence operations shows them more than they were meant to see, they begin to question their roles in a system whose reach is unlimited but whose safeguards are not…

It premiered at Hampstead Theatre, London, in 2020, in a production directed by Roxana Silbert

'Grips like a vice... a whip-smart thriller' ~ The Stage

'A cross between Kafka, Hitchcock and le Carré, the play is a heady brew... a rollercoaster ride' ~ The Reviews Hub

'An enjoyable internet thriller… the plot is gripping, the dialogue snappy… a sharp contemporary play about the way we live and what we value' ~ Financial Times

'A dark, twisty love story with complex ethical and intellectual ramifications, fizzing with wit… a play that is genuinely for today' ~ Telegraph