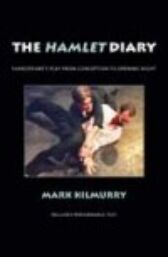 When Mark Kilmurry co-founded the Studio Company with Patrick McIntyre, he had the opportunity to play the part he had always ached to perform - Hamlet

But preparing for the production he begins to wonder if it is foolhardy. Can he take on such a mammoth role and also direct?

In this diary, Mark shares his thoughts from the inception of the idea through to opening night. He explains the rationale behind Studio Company's acclaimed production, the how and why of the cuts to the script and describes the rehearsal techniques and exercises that bring it all to life.

Mark Kilmurry is a writer, director and actor whose style is derived from his experience with the award-winning English theatre company The Snarling Beasties, who have impressed audiences world wide with their distinctive, cinematic and high energy brand of theatre

Now living in Sydney he produces original theatre works for the stage with his new theatre company co-founded with producer Patrick McIntyre, and his other plays include Happy as Larry and Viv, One Shot and Will the Real James Dean Please Stand Up?