The Half - Photographs of Actors Preparing for the Stage 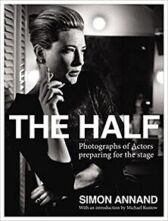 Simon Annand's exploration of this usually off-limits journey, a meditation on the mystery of the final stage of an actor's journey from dressing room to stage, makes for compelling viewing and offers us a spellbinding glimpse into the heart of the acting process

With an introduction by Michael Kustow