The Great Gromboolian Plain and Other Plays 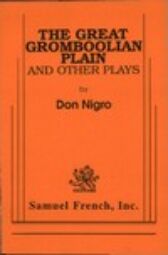 Three delicate ballerinas are in the dressing room during an intermission for Swan Lake. Scheherazade smokes cigars to relax. Petroushka, who has a drinking problem, is worried about how many buttocks she has and would kill for a meat loaf. Both are worried about Giselle who is so convinced that she is a swan that she is laying eggs. The roof leaks, they have not been paid, and Giselle is molting. A funny take on the transformational magic of art

The Babel of Circular Labyrinths - M1,F1

An old blind writer sits in a circle of light in a dark library asking why he doesn't just sit in the dark, why a raven is like a desk and what is the nature of labyrinths. He hears footsteps and smells perfume. The intruder is a beautiful woman who may or may not be a character in a story he is writing. She brings a knife from the labyrinth of mirrors. Someone is going to die in this unusual play about art, time and the relationship between fiction and flesh

This long one act is a love story that takes place on the grounds of a mental institution. A young girl who believes she can time travel meets a man who is not what he seems. Institutionalized by her sister to coerce her into revealing the location of their father's last poems, Dinah is protecting a deep secret. Magellan's attempts to understand her send him back to the turn of the last century, back to a place where a young man is forever asking a pretty nurse to dance to the carousel music

A young tourist lost in a strange country with an erroneous map, sees Lara sitting on a bench reading a black book. Mala manages to communicate her situation and ask Lara for directions. Strangely, she understands Lara's foreign language more and more as the play progresses. She senses that there is something mysterious about this place but doesn't comprehend what it is until it's too late

Sir William Crookes, a respected physicist in 1875, is investigating a beautiful young medium. He becomes convinced that her alter ego from the spirit world is real, and she, seeing the great man falling under her spell, confesses that the vision emerging from the cabinet during seances in merely her underwear. Crookes refuses to believe she is a fraud until the spirit appears to settle the argument. This twisted love story about how desire subverts understanding is based on a true story

The Wonders of the Invisible World Revealed - M1,F1

A young housemaid is fascinated by a bad tempered and impatient yet compelling lodger whose room is full of strange bottles. Wrapped in bandages with no flesh showing, he tells her he is invisible. She thinks he must be a dangerous lunatic until he describes some private moments in her bedroom. By turns funny and frightening, this dark love story reveals the wonder of many kinds of invisibility