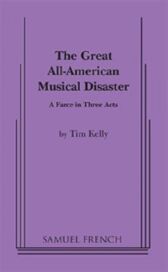 Film producer Junior Dover Jr hasn't made a picture since his last flop, "Zombies of the Stratosphere" but his latest project has everything - from earthquakes to savage lobsters

Junior induces every major Hollywood star, a few has-beens, and even a maybe, to appear by tailoring separate scripts to meet each star's personal requirements

So each star assumes he or she is the whole picture, with the other Greats relegated to supporting roles - an assumption that leads to all kinds of madcap stage frenzy

How Junior manages to stay one jump ahead of disaster makes this play a champion laugh-getter!

This is Hollywood, after all!

Anything can happen, and does!

All the parts give a comically ludicrous sweep to the legend that is Hollywood!