The Great Acting Teachers and Their Methods - Volume 2 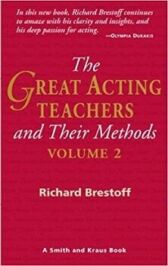 Who created the theories, methods and exercises used in today's actor-training programs?

What rationales underlie the diverse approaches to the art and craft of acting?

What is the rationale behind the lesson?

Why is it useful?

Andre Antoine, Jacques Copeau and Michel Saint-Denis represent a virtually unacknowledged yet powerful French influence on acting and actor training in the United States and abroad

Next he explores the acting approaches of American Realist teachers known as the passionate questioners, such as Elia Kazan, who is disgusted with Broadway's commercialism, Uta Hagen and David Mamet

While differences among the various acting theories and practices are noted and analyzed, so too are exciting and unexpected connections among them revealed

In this follow-up to his first volume that has become an essential classroom text, Brestoff brings to vivid life some of the greatest theorists and practitioners of the past and present

In doing so he celebrates the astonishing, mysterious and wondrous art of acting itself