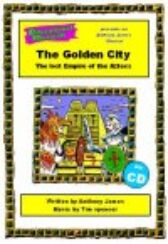 And with the help of the Codex, we travel back in time to the last days of the Aztec Empire and to the legendary Golden City, Tenochtitlan, where the Aztec ruler, Moctezuma is about to face the Metal Gods who have invaded the Aztec world

The story now follows Chipilli, a young Aztec farmer, who realises the Spanish threat and sets out to save his friends and to leave a record of his people for posterity

Created specifically for children, The Golden City is a fictional account of life in the great city of Tenochtitlan and the arrival of the Spanish