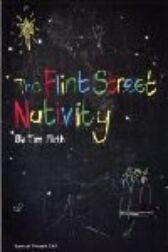 Squabbles arise when Gabriel wants to play Mary, the Star grumbles he's not a proper star like they have at NASA, Herod won't stop waving to his mum and dad and the subversive Innkeeper is determined to liven up the traditional script

And then the stick insect escapes ...

The children are played by adults, who later play their parents so the set changes accordingly to reflect the difference in scale

It was first performed to critical acclaim at the Liverpool Playhouse

Music is available separately On Hire

"Exposes what an ungodly snake pit of paediatric power-politics the staging of your average Nativity play can be ... There are moments when you may wet yourself laughing" ~ Alfred Hickling, The Guardian