The Flea and the Professor 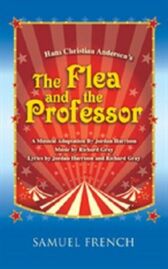 Adapted from the last tale by Hans Christian Andersen, this new musical odyssey celebrates friendship, whimsy, and the excitement of the unknown ...

A young professor loses just about everything in the world

Everything, that is, except for the flea who lives in his vest

Starting over again, the Professor and the Flea become the best of friends, start a circus act, and set off to tour the world

And together they must overcome shipwrecks and cannibals

THE FLEA - played by a big man

THE PROFESSOR - played by a little man

THE CANNIBAL PRINCESS - played by a woman of any size; big voice

THE CANNIBAL QUEEN - her mother

THE STORYTELLER - whose real name is Livia

" ... the kind of entertainment capable of forcing young children to lift their sagging heads up out of their laps while also filling their tiny hearts with a wonder available nowhere but on a stage" ~ Out With the Kids