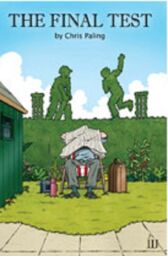 Peter and Ruth have had a long and happy marriage

Or so Peter believes

They both have their own interests he loves listening to the cricket on the radio, she likes to travel

When the new owners move in later that day they discover they have more than they bargained for - an elderly, cricket-loving squatter who refuses to move out of their garden

A touching and poignant comedy about marriage, cricket, and the dangerous lure of Bexhill-on-Sea