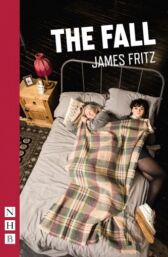 Like Evan Placey's Girls Like That and Dennis Kelly's DNA, The Fall is an up-to-the-minute dramatisation of some of the major issues facing teenagers today

Sharp, smart and powerfully hard-hitting, it looks at the differences in opportunities offered to them against those of their grandparents, and explores how attitudes to life - and more importantly - death have changed

Dark and funny it also asks how much can a younger generation, dispossessed and disenfranchised, truly empathise with the old

Especially when their own future is at stake?

The Fall is composed of three pieces, each named for their order in the play ...

The Fall offers powerful, stimulating material for teenagers to read, study or perform

Premiered by the National Youth Theatre at the Finborough Theatre, London in August 2016

"James Fritz's triptych for young people leaves plenty of room for expression and individuality, and is luxuriously self-aware as it delivers a youthful interpretation of age through a filter made up from stereotypical understandings of youth" ~ Exuent Magazine

'Impressive ... exciting ... captures the spirit of teenage risk-taking while giving young actors the opportunity to face up to once-in-a-lifetime dilemmas' ~ A Younger Theatre