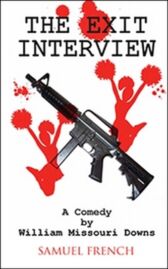 A wild and witty farce follows that ricochets through Brechtian interludes, a pair of politically-radicalized cheerleaders, a pompous newsman, communiques from God, and debates on religion, science and politics before reaching its surprising conclusion

"A gleefully boundary-flouting riff on religion, piety and the limits of belief ... William Missouri Downs' bonkers theatrical carnival is to conventional plays what Burning Man is to a weenie roast. It's like an elaborate, lovingly constructed spitball aimed at the idea of divinity ... Downs' vision for it is nothing if not ambitious - he shoehorns comedy and commentary about religion into a broader construct of questioning and messing with pat perceptions of reality, taking his cues from the work of the German theater icon Bertolt Brecht" ~ San Diego Union Tribune

DICK FIG - a young college professor with his leg in a cast; his PhD was on Bertolt Brecht

EUNICE - a pawn in the human resources department

ACTRESS #1 - CHEERLEADER #1, with pompoms; MARY, an oboe player and Dick's ex-girlfriend;SAMANTHA, a mother with a baby carriage; BUSINESSWOMAN #2, an expert on underwear; and DR. DOBSON, PhD in religious studies from Yale