The End of Acting Technique 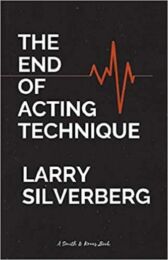 Shortly before his death, Sanford Meisner arranged for Larry to create a written legacy of his teaching techniques

Now one of the world's foremost authorities on the Sanford Meisner technique of acting, Larry is the author of the internationally acclaimed four volume series, The Sanford Meisner Approach: An Actors Workbook

In addition to being the most published acting coach in the world and an award winning actor/director, he's the Master Teacher of Acting and Full Professor at renowned Shenandoah University Conservatory of Theatre

He's also worked professionally as an actor and director across the United States and in Canada, winning the Seattle Critic's Association "Stellar Acting Award" for his portrayal of "Teach" in the Belltown Theatre Center production of American Buffalo

Known as "The Teacher's Teacher", Larry has trained hundreds of professors and high school drama teachers

In short, Larry knows his stuff

Better yet, The End of Acting Technique is both a book and an invitation to Larry's interactive website where you can join him online for a longer discussion, instruction and exercises