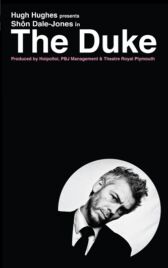 An acclaimed male monologue from the 2016 Edinburgh Festival

He kept the figure we affectionately called The Duke, wrapped in sponge, in a big box, under his bed

After he died in 2001, my mother decided to take the figure out and display it on the table in the bay window

In the autumn of 2015 my mother calls

She tells me she's broken The Duke"

Runs about an hour

"This is art that practices its preaching: made for nothing, but doing something. And delighting as it does, just as art should. You won't find a show with a bigger, better heart anywhere on the Fringe" ~ What's On Stage