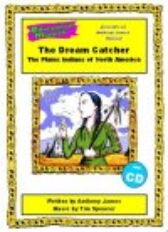 Ancient Indian Brave, Old Grey Cloud, recounts the story of a time before the White Man

A time when a young Lakota Squaw, Spring Rain, saves her tribe from destruction

Created specifically for children, this lively look at the customs of the Plains Indians is accompanied by a memorable musical