The Dream Catcher - The Plains of North America - ASSEMBLY PACK 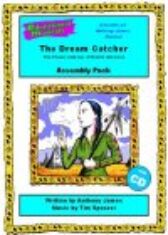 A mini version of the parent show with three songs

An ancient Indian Brave, Old Grey Cloud, recounts the story of a time before the White Man when a young Lakota Squaw, Spring Rain, saves her tribe from destruction

Spring Rain has a vision telling her that a rival tribe will wipe out her people if they let pride draw them into a war. She tries unsuccessfully to persuade the young braves that courage is something greater than the acquisition of notches on a Coup Stick

The Tribes Shaman, the cantankerous Dead Crow, feels threatened by Spring Rain's spiritual visions and tries to persuade Red Hawk, the Tribes Chief, to have her exiled. Eventually it is the realisation of her vision, itself, that saves the Tribe and shows them the meaning of true bravery as an unarmed Spring Rain, herself, confronts one of the deadliest creatures of the Plains