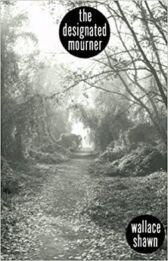 Woven out of three monologues in what one reviewer called "a triple sonata of oppression and incomprehension" ~ The Sunday Times, Wallace Shawn's play, The Designated Mourner, is a masterful drama about the pursuit of aesthetic subtleties in brutal times

The three characters include the eponymous designated mourner, Jack, his wife, Judy and his erudite father-in-law, Howard

Although Judy is tied to her famous father by a passionate bond, she is nonetheless drawn toward Jack, whose taste in cultural forms follows a disturbing path

When Jack abandons both Judy and Howard, he continues his riveting societal free-fall into a world of gleeful savagery

Copy signed by the playwright