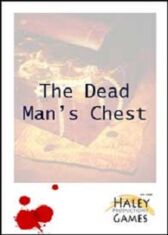 A Dead Man's Chest, if you will

NOTE: The Mardi Gras Ball is optional - it can be any sort of Gala event or Fancy Dress Party - but it's best served with a Pirate twist

THERE ARE 8 PRIME SUSPECTS:

Lilly Laveau
The Governor's new aide, a fiery Cajun woman with a deep and abiding love of knives

Cutler Sinslayer
A magistrate with his own personal version of law and order against criminals, pirates and other malfeasants

Annabelle Greatlush
A doddering, blundering spinster and reluctant carer of the infirm and elderly

Remember, EVERYONE will be actively involved in this mystery because it will be their job to solve the case and because you'll be encouraging them to come in costume and in character

They'll roam the room "gossiping" about the goings-on and quieting the audience down during a main action as well as answering questions, bring primary suspects to tables for questioning and making sure your guests have seen the physical clues that have so far been revealed

THE SECONDARY SUSPECTS ARE:

Caleb (male) or Callie (female) Roscoe
A very eccentric, very superstitious Cajun local who wrestles alligators, charms snakes and claims to be psychic. Thinks that s/he and Annabelle are best friends. Annabelle would strongly disagree

Elton Coffin
The local undertaker, formerly betrothed to Raylene and still bitter she broke off their engagement to marry Fayette