The Daughters of the Moon 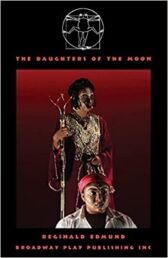 The Daughters of the Moon follows a runaway slave girl and a former plantation mistress wanted for murder as they embark on a perilous journey North towards freedom, guided by an Ancient African Goddess

CAST SIZE -All Female - 6 roles are for Black actors

“The Daughters of the Moon is a thrilling survival adventure, historical and poetic, with strong themes on race, gender, and empowerment” ~ Cleveland Centennial

“In The Daughters of the Moon matters of race, gender, politics and history all combine for a thrilling, thoughtful plot” ~ Houston Press