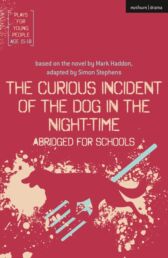 The Curious Incident of the Dog in the Night-Time brings Mark Haddon's best-selling novel to life on stage, adapted by two-time Olivier Award-winning playwright Simon Stephens

Winner of seven Olivier Awards including Best Play, along with the Drama Desk, Outer Critics Circle, Drama League and Tony Awards for Best Play, this remarkable and exhilarating "theatrical masterpiece" originated at London's Royal National Theatre in 2012 before going on to transfer to the West End for multiple seasons, followed by its acclaimed Broadway run

He stands besides Mrs Shears' dead dog, Wellington, who has been speared with a garden fork

It is seven minutes after midnight and Christopher is under suspicion

Attempting to solve the mystery of who killed Wellington, he records each and every fact in a book

He has an extraordinary brain and is exceptional at maths

He detests being touched and distrusts strangers

Nevertheless, his detective work - forbidden by his father - is about to take him on a frightening journey that will upturn his world

This is the Abridged Student Edition