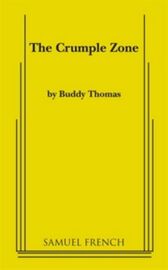 This hilarious off Broadway hit, set in a run down apartment on Staten Island, concerns three gay roommates coming to crisis during one frantic Christmas weekend

Terry, an out of work actor who can't keep a job or get a date, spends his days swilling cheap vodka and playing referee to a messy love triangle

Extremely funny and deeply moving, The Crumple Zone is about staying together, breaking apart and the things we lose along the way

"The kind of domestic comedy that might have been written by Neil Simon if he were gay and 40 years younger!" ~ N.Y. Times

"Sparkles! The first fresh comedy of its type to come along in years. It is not going too far to draw parallels between Neil Simon or Kaufman & Hart at the top of their powers.... A rollicking farce with a heart of pure gold" ~ LGNY Newspaper