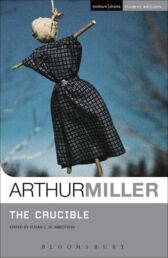 In this small, tight-knit community gossip and rumour spread like wildfire inflaming personal grievances until no-one is safe from accusation and vengeance

Seen as a chilling parallel to the McCarthyism and repressive culture of fear that gripped America in the 1950s, the play's timeless relevance and appeal remains as strong as when the play first opened on Broadway in 1953

A chronology of Miller's life and times

A summary of the plot

A commentary on the characters, themes, language, context

And a production history of the play

There are also over twenty questions for further study

Detailed notes on words and phrases from the text

And the additional Scene 2 of Act II

This is the definitive edition of the play